This is an updated version of an older program.  Understand this is a program for people with training experience if you are a newbie please try TMC 1.0  or FFE 1.0.  I was in a bad place when I wrote this and I feel that I have improved on it.  When partaking this adventure of this program it will be important that you are not in a caloric deficit  getting good sleep and eating enough protein.  1.2-1.5x lean body mass will tell you how much you should be consuming in grams. 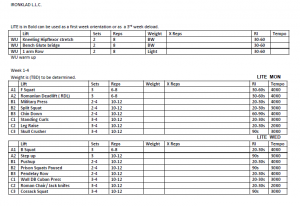 Historically speaking, I have heard of 3 times where individuals and/or coaches were trained trying to reverse engineer athletes.  The first case I remember was my Kinesiology teacher explaining how the Russians tried to reverse engineer swimmers towards Mark Spitz and his swimming asymmetry in the hopes of increasing swim times.  Ironically, Mark’s coaches were trying to fix this asymmetry, which later increased his times and decreased the Russians times. In cross country skiing I’ve heard that coaches were training younger skiers towards vagus knees in order to simulate the gait of advanced athletes.  My dad once told me that the Japanese had adopted what was known as the frog style (below) olympic lift which incorporated a varus knee to compensate for valgus knees occurrence.  I have yet to confirm all of these stories as it was often 2nd and 3rd hand information.

The first 2 stories are a type of reverse engineering that were short sighted. One can assume that greater injuries likely occurred from the valgus knees stress on the ligaments of the knee along with the possibility of low back injuries.  What can be gained by looking at these examples is to understand that chronic training can and does lead to asymmetry.

Anecdotally, I’ve used back squat partials in the past in order to get used to heavy weight and also to facilitate post tetanic potentiation.  However what I noticed occurring is my body getting used to shortened range movements and my lordosis/anterior hip tilt becoming more pronounced when squatting.  I think this situation can also occur with people that only do power cleans and neglect to do full cleans but at a different level due to movement pattern.  After all, the body is memorizing patterns and trying to figure out how to become more efficient at movement patterns by laying down fascia and soft tissue. I believe fascia is to blame for loss of range of motion while allowing for acute strength gains, also seen in isometric work.

That being said, I have in the past made the mistake of over attributing strength/power as a quality that will have direct carryover.  Strength/Power do have direct carryover, but these two characteristics are amplified by skill.  Once you have all 3 ducks in a row, mastery will follow.

A lot of information is written about varying subjects in the field of athletics and a lot of vocabulary has come out– too often a principal or an idea is renamed.  Sometimes I think it is to create a type of gimmick and expound on old information or to try to shed light on old information.   Often it is an old gift wrapped in new paper.  Kind of like Einstein’s relativity thought experiment, two different people see lightening striking a train. These things are usually a matter of perspective.

Not too long ago I heard about muscles that were referred to as torque converters. Many years back, I was exposed to the idea of stabilizer muscles and their ability to hinder a person’s performance due to their lack of strength.  Prior to this information, appeared the idea of weak decelerators and around the same time something called a strength deficit, which was known as structural balance, and is now talked about as the mobility and stability trade off.

There are also techniques and courses that bare a striking similarity to gua sha therapy.  Another course is similar to cryokinesis, but without the ice.  There are old exercises that have been reinvented with new names.  There are old techniques that have been re-envisioned and marketed under new basturdized versions of the same thing.  I am not saying all the “new” gimmicks or ideas are bad; in some cases they may have subtle differences that make them superior.  After all, a rose by any other name would smell as sweet unless of course it’s not a rose, it’s something someone has redefined as a rose.

Just be careful, keep an eye open, and an ear to the ground, because with new old ideas come neophyte herd behavior and with neophytes dogma.  What can be gained from this rant?  Hopefully, a new-found cynicism for man to embellish old ideas.  Just remember the old saying, “familiarity breeds contempt,” so embellish for this seems to be the zeitgeist we live in.