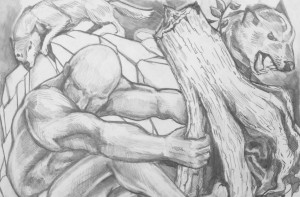 The story of Milos of Croton is often presented as the story of progressive overload. Milos carried a calf into town everyday and as his burden grew so did he.  Milos had the foresight to burden himself at a young age to reap his reward later of becoming a champion grappler.  This is where the story often ends.  However legend tells that Milos met his fate trying to rent a stump in two with his bear hands and was killed by a pack of wolves when his fingers were stuck.  What the story doesn’t tell you is why Milos went out of his way to tear stumps in half.  Was it pride, leisure, or boredom.

My suggestion is Milos was doing rehab.  As Milos went on in his years as a grappler he developed the chronic protracted stance of a wrestler.  Due to the kyphotic nature of the sport Milos had slopped shoulders and underdeveloped rear delts along with upwardly rotated and winging scapula.  Milos was using the stumps to correct his imbalances and pull his shoulders back into alignment.  Somewhere along his journey he was having shoulder trouble and either an older grappler told him the  how to correct it by tearing stumps apart.  Perhaps he stumbled on it by accident and realized that it made him asymptomatic.  Either way I think he was doing rehab but sadly that fateful day he bit off more than he could chew.